In a tidal area, the view changes dramatically just with the passage of an hour or so.  And yet it is one of the things we can grow so used to that we just ignore it, to the point that when I drove along this harbor every day at work, I would never have been able to tell you later what tide it had been.
Fisherman care, of course, and tidal charts are commonly available.  For people my age it is mostly only important in the summer when we might want to go swimming during the day, or when we want to plan to picnic at night.  The gnats and flies are much less of a problem when the water is high. 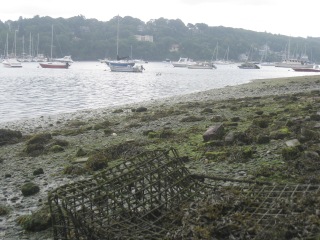 Low tide exposes some of the detritus heaped on the bottom from long use.  It would be romantic to say centuries of dumping, but in fact the harbor was dredged around 1980 which effectively killed off most of the clams and a lot of other stuff.  Anything there now is mostly rather recent, at least near the middle channel.  Supposedly the good news is that Huntington can now host private yachts the size of ocean liners.
The lobster industry of Long Island Sound didn’t end until the mid Nineties, probably from pesticide use to kill mosquitoes.  The financially interested users of pesticides have lawyers and kept scientists who dispute that.  As in most legal matters, statistics can be manipulated by the wealthiest as necessary.  Anyway, there used to be huge stacks of lobster traps stacked on shore or floats during off season.  Now all we have are these algae covered relics, picturesque enough in their own way, I guess.
Wed-

Typical high tide pushes up so there is little room between the deck of the dock and the waves.  During storms, the water will ride well over the platform, often pulling up the pilings and forcing them to be driven back into the bottom muck with a pile-driver on a barge that constantly is pushed from marina to marina by a cute little tugboat.

This is another outpost of the town beach, the kayaks are part of the summer kid’s program.  They’re cheaper and more versatile than little sailboats, but somehow a little less picturesque in spite of their bright colors.  Anyway, looked at with  open mind, almost anywhere is a lovely view.
Thu-

Fishermen pay close attention to tides in mysterious ways.  Depending on where they are going, the season, the moon, the weather, and just common fisherman knowledge there are times when it is worth going out into the wider waters, and times when it’s just better to do nothing.  Of course, I suspect that is also a way to get away from other distractions and relax as well.


I’m not a particularly good photographer and have constant trouble even keeping the horizon level.  The tilt of the shoreline may evoke a seasickness, but you will just have to compensate.
Fri-

Wading birds like this large heron prefer the incoming half tide, when little fish abound.  They’ve adapted surprisingly well to the massive industrialization of the marinas and shoreline, although this side of the harbor is somewhat isolated and protected by the road running along it.
I enjoy the surprising interactions of the wild and the “civilized” more than I do the pure wilderness or the completely urban.  I hope that eventually others will come to share this aesthetic, not completely one, not completely the other, but each able to coexist and interact in surprising and thoughtful ways. 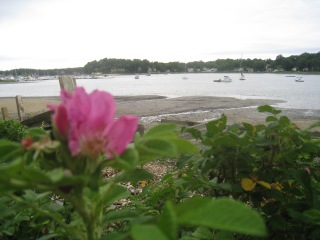 An unfocused beach rose frames the tidal flats, filled with clams which can no longer be harvested this far from the inlet due to pollution and tiny hermit crabs which come out each low tide to wave their claws in seeming protest at the sun.  If you walk along the edge, you are likely to see horseshoe crabs flowing about in their ancient rituals.
Tides are pretty unpredictable in terms of how low or how high they actually get.  Each one is somewhat different _ some massively so _ depending on the time of year (solar relations of earth and sun), phase of moon, atmospheric pressure, and, of course, the influence of large storms out to sea. 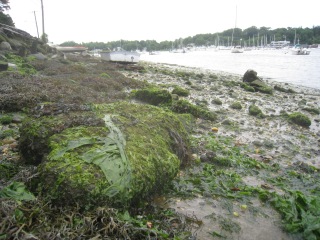 Fortunately, we still have more seaweed than algae around here, in spite of people fertilizing their lawns excessively and the dog waste which washes down from the hills and road.
That is not completely luck, since the county has fairly strict rules on what fertilizers can be sold and when they can be applied, which is at least followed by most of the yard crews.  And people are now picking up the dog shit more often than not.  So laws and habits can make a difference, and that is always something to keep in mind no matter how hopeless and massive problems may seem.