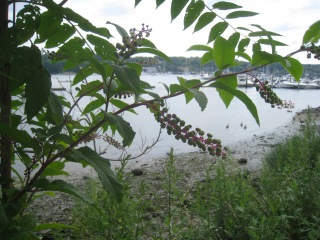 In an area as worked as Huntington Harbor over the last three hundred years, it is inevitable that almost all the plants are invasive outsiders.  Here there are three: ailanthus, ragweed, and pokeweed.  All of them handsome in their way, but certainly not the original native species.
Of course, it is difficult to say what an ecology here should be at this time.  The most natural is no doubt the one that actually exists, ragweed and all.  The constant churning of dust and dirt and poisons is what the human interface brings with it, especially with a dense population.
Tue-

Jimsonweed is so handsome in its own way that it would almost make it in a garden.  Supposedly, narcotic properties which the young have discovered.  The flower is on its way to fruit, part of the long cycle.

We are so attuned to nature that all this looks right and excellent.  It does not matter if this particular plant was here a thousand years ago in the “natural” environment or if it arrived on a boat yesterday.  As long as it does not monotonously cover acres and acres while choking out everything else it adds pleasant contrast and looks just dandy as it is.

Phragmites are pushing out the native spartina grass.  They fill in the salt ponds, and march down the shore, and expand into disturbed flat meadows near the coastline.  Not particularly good habitat for wildlife, nor particularly useful to people.
But it is hard to argue that they are not beautiful.  The bright green stalks shoot up relatively early in the spring, making the harbor outlines more gentle.  In summer as they reach full height they frame views from every direction, a photographer’s dream.   And in fall and winter, the graceful plumes begin heavy and decay month by month never giving up their final outlines _ sometimes snow and ice-encrusted _ until the next year.  If they were not so persistent, they would be treasured.
Thu-

Some consider ragweed by far the worst of the invasive species.  It is everywhere, never particularly pretty with no flowers, little wildlife value, and contributes great amounts of pollen to aggravated allergy sufferers.  The French hate it so much (under the rather beautiful name of Ambrosia) that they have invented diabolical tractor attachments which extend several feet to each side, and produce a heat of hundreds of degrees to cook the plants as it passes over.

Yet, I rarely find it particularly invasive.  Bindweed, for example, is far worse.  Ragweed shows up in the garden but not the lawn, is easily pulled out, and easily identified.  In fact, it is far more at home where pretty much nothing else would grow, replacing not native nor more beautiful cultivated alternatives, but rather adding life instead of dust and mud which would be there otherwise.  Naturally, I am in a minority with this opinion. 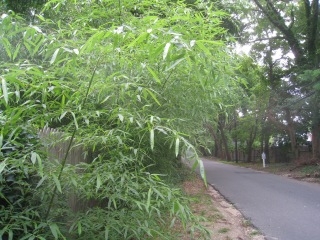 Bamboo fortunately does not propagate around here by seed, but once established in a clearing it crowds out everything and resists elimination by chemical, fire, or backhoe.  The patches have gotten so bad that the county has banned its sale or planting.  It’s pretty enough, but can destroy foundations and everything else in the way of its rhizomes.
It is not really a menace to whatever natural local ecology is left, because the local natural ecology is deep forest and dark spaces under large trees (as homeowners and utility companies constantly relearn to their chagrin.)  Bamboo needs some sunlight, the patch here is marginal.  I kind of enjoy it, the leaves beautiful in all seasons, lovely in winter.  This particular cluster has even provided a few fishing rods for my kids, in times gone by.
Sat-

Chicory fills vacant lots and roadside.  Although the foliage is stringy, the flowers are lovely in the morning when they are open.  Once upon a time the roasted roots provided a coffee substitute.
In my mind, this is less an invasive weed than a pretty wildflower.  All of our internal classifications are subjective and open to change, ignored by nature and reality.  To an artist, a rose in a cornfield is fit subject for a photograph or painting or short story, to a farmer it is a nuisance and loss of income.

No idea what these plants are, growing along the tideline where old boats, docks, and other flotsam is periodically dumped and picked up by the town.  Could be foreign, could be native, scratching out a thriving living where obviously nothing else is making it.  And making pretty yellow flowers in spite of the obstacles.
It used to give me great pleasure _ a kind of control _ to be able to name everything I say and somehow relate it into the world of book knowledge in my head.  Now, not so much.  The vastness of the world is enchanting in and of itself without being identified, categorized, and filed.  Learning to let go of useless approaches to experience is a difficult task, and too often seen as a loss rather than a gain.