As the highest temperatures of the year grip the area, people used to flock to beaches and onto boats, anything to get into cooling breezes and away from the stifling, fly and mosquito infested inland areas.  Now there is somewhat less seasonality, as people rush to air conditioned barns to browse and buy what they think they need, and hide out in hermetically sealed homes and cars to avoid the possibility of sun exposure and possible risks like lime disease or west nile virus or e-coli polluted water.

I end up feeling, with a few fellow adventurers I meet walking about or the “lower classes” toiling on yards and actually doing work on the boats, like an almost different race of beings.  The “outdoors” is nature, less artificial, more healing, and whatever danger it may present is danger that is usually to our benefit.  And the stimulation you get _ looking at the deadly nightshade or the neglected rowboat or the weeds in this view, for instance _ is worth almost any price to experience fully.

In spite of the sign, there is a lifeguard sitting in the tower at Brown’s beach _ remnant of an old estate.  Hardly anyone goes in at low tide, and besides it’s pretty early in the morning early in the week.  Mostly sandy bottom, but it turns to muck, and the water quality here in the actual harbor _ even though it is right in front of the inlet _ can be suspicious, although it is tested daily.
But it’s a lovely scene and actually quite heavily used, even in the winter.  Kids can run around in the sand, use the playground, and scream their heads off; adults can just stare at the horizon and unwind a bit; and frantic younger folks can grab an hour at lunch or around jobs to sit for a short suntan before heading back.  And it doesn’t cost a dime, which is certainly something an egalitarian like me appreciates a lot.
Wed-

Grand to have a country dirt road on an old estate near my house.  It leads through the overgrowth past a pond from the mansion to the boathouse,  and is filled with flowers and various kinds of wildlife, including _ recently _ a fox.  In a solidly populated metropolitan area (which is what we are here) it’s a breath of an earlier and simpler _ if just as economically unfair _ time.

On a hot July morning, the cicadas are already loud, the birds hide, the tadpoles are just developing, the raspberries are almost ripe, and the humid heat has not yet had an entire summer to ravage the leaves which remain lush.  I could almost pretend I am a kid walking down to the water barefoot with a bamboo pole in hand.  Places that evoke fantasies are as necessary as those that remind us of the interconnected nature  of all life. 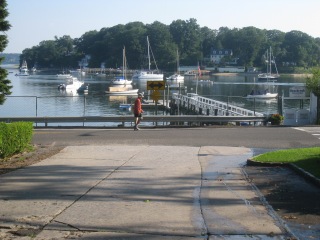 By eight AM the temperature is already heading into the 80’s, so people who can have already been out and about.  There is, of course, a significant drop off when any extremes of weather hit _ rain, cold, or heat _ but walking, jogging, or cycling along West Shore road is a favored activity of many when they consider it possible.  The regulars are usually cheerful and friendly, there are lots of others who grimly stride along, trying to lose weight or lower blood pressure, listening to music or talking on phones, angry that their perfect lives should be interrupted by anything so mundane as bodily health.
I’ve always considered it a privilege to be here, where I can walk a block from my house and have the constantly changing seascape and people and their activities besides.  My own personal problem is that sometimes I get too wrapped up in my internal musing to pay much attention to what should be feeding me interest for the rest of the day.
Fri-

At this time of year the harbor is filled with boats _ the visible ones floating, although hulks from many years litter the bottom.  As pleasure boaters go upscale they tend to use marinas instead of dinghies to reach their vessels.  And the clammers ferrying out are fewer and fewer as time goes on.
An inconspicuous yellow hawkweed forces its way out of the asphalt to ripen into soft floating seed carriers. It’s the kind of loveliness you never see when riding a car or bicycle, and rarely when engaged jogging, talking on the phone, listening to a music player or even (my particular sin) following a heavy train of thought.
Sat- 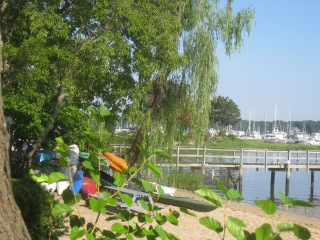 Kayaks are sitting under the willow, providing a bit of color to the solid greens of midsummer.  Kayaks have become ubiquitous in the last few years, which is certainly a good thing since they have no motors and make no pollution (at least after they are made and until they are thrown away.)  There do seem to be a lot more on the shore and in the racks than there ever are actually on the water.
Surprisingly, surrounded by water and boats, I am not a boat person.  I like to walk _ I subscribe to the belief that golf is “a good walk spoiled” _ and time on a boat with nothing to do is very like being in prison with high definition television.  Something grand like the Staten Island ferry is acceptable.  Thinking about having my own platform on the water just makes me nervous.

Summer just started, it seems, and heat is high, but already there are premonitions of times to come.  Like these dead leaves at the Brown Pottery site park.  In fact, there are signs everywhere, but it is more fun to wallow in the days that are, rather than worry about the future rain, ice, and cold.
I’m afraid I’ve always been something more of a grasshopper than an ant.  I found life uncertain, and never quite trusted long term plans.  Each moment is more than enough, and we should strive to be aware of and grateful for each one.