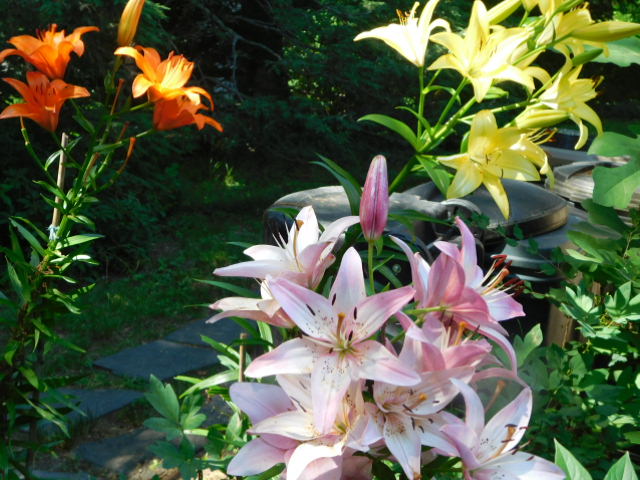 My personal fireworks are these brilliantly bursting lilies in my back garden.

Rare bucolic view high on a sand bluff above the harbor;  mcmansions are popping up all around.

Delicate blue chicory is best appreciated close up, a hardy miracle where almost nothing else grows.

Deep breaths, calm, ignore the chatter, flow with reflections, waves, and reeds. The real world goes on.
“Nice shot,” remarks Lucifer, as he pulls out a wicked-looking crooked driver from his decal-decorated fake leather bag.
“Why, thank you, sir,” grins Michael.  As always, his shot has gone straight and true, the fairway glittering under the arc of the blazing ball as it passed by.
“Don’t sir me,” Lucifer grunts.  “Remember, we agreed to take the day off _ well at least this morning _ and just enjoy ourselves for a change.
“Oh, I almost always enjoy myself,” Michael smiles beatifically.
“No choice,” mutters Lucifer.  He swings mightily, his greasy ball unsurprisingly smacks a few trees and lands in the rough, but quite near the other.   Their handicaps are, after all, nearly even.
“Been busy lately, I see.”
“Not so much.  The world seems to be taking care of itself quite nicely from my perspective.  Idiots everywhere, and sin ascendant from the bottom on up.  Happy times for me, if any times were happy.”
Michael frowns in thought. “I don’t have much to do either.  I cannot admit it, of course, but everything seems pretty futile.  Frankly, I have trouble even finding anywhere to start.”
“Perhaps we have merely become superfluous.”
“Maybe that’s why the pension started to arrive last week.”  Michael lines up the next hole.
“You think?  Well, we better enjoy this interlude before the real action starts…”

Unconcerned gull stares quizzically while garbage floats by, some kind of natural statement I suppose.
Refuse of global shores has congealed
Into a stinking, ignorant, prejudiced landfill
Larded with lumps of religious certainty,
Fuming capitalism belching whiffs of wealth
That may destroy the planet.
Sadly, probably, still
The best hope of the world.