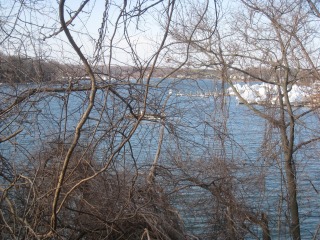 Had been planning to theme this week as “winter bound” _ it’s been hard to get out the house these last few days between snow and cold.  But this morning when I arose it was 57 degrees out, the icicles were gone with most of the white cover and I hardly felt trapped in spite of the downpour.  By midnight, we are supposed to be back in the teens.  Should be an odd week …
Afflicted with a common disease of the age, I end up taking too many pictures and saving them.  This is from the “archives” of a week ago.  Although I sometimes make fun of those who rush from place to place snapping shots to prove their presence,  I respect that doing something that will “save” an experience lends a focus to life, makes us concentrate, and can make us appreciate things more.  Like these vines and branches, that I would no doubt otherwise ignore, which form a pretty tracery over the empty port.
Tue-

Strange little thaw leaves the turf frozen under a thin layer of mud.  Signs of winter everywhere are clear enough.  Looking north a kind of peach color breaks through saw-toothed clouds over the hundred-year-od lighthouse.  Although the camera can’t really catch them, I love the infinite variety of soft browns in landscapes such as this.

Extreme weather does help us appreciate any breaks when we have them.  It is easier to appreciate a rainy day in the fifties when it is sandwiched between a blizzard and sub-arctic howling wind.  Our memories tend to be so short that after a week or less we take whatever wonders we encounter each moment for granted.

We’re in the second of several days of below-ten degree weather, but this picture was taken before it settled in.  My poor equipment and technique does not capture it adequately, but I love the green glow of lichen on old trees on damp days from here on through the summer.  There’s something mystic and ancient about the rough chaotic growth.

Some might say _ well, improve your technique and equipment.  I have become as fanatic as anyone concerning certain things during my life, and I now resist.  There is a happiness in staying within self-imposed bounds, not becoming an expert, not devoting hours to something you like to do casually.  My technique and equipment is totally adequate for my demands.  Upping my demands would only complicate my life unnecessarily
Thu-

With the frigid temperatures, a skim of ice forms, mostly from fresh water layered on top.  We have a lot of springs coming out of the hills along the waterfront, constantly trickling (or pouring) out of the sand.  That drives the road crews nuts because the embankment under the blacktop keeps getting undercut and is always wet.
This boat probably won’t be going out today.  I say probably because, like the rest of us, clammers can be crazy sometimes.  If they need to get to their boat, they will, even if they have to chop their way.  If you look closely, in the mid distance by the sailboat there are trails of a few who have already gone through.
Fri-

Hal Harzog wrote Some We Love, Some We Hate, Some We Eat concerning our odd relation to various animals.  Geese seem to fill all the roles at once.  We are capable of fervently holding immense contradictions, various parts of which we truly believe for minutes at a time.

Geese are an aggravating nuisance, fouling water and grass and crowding other waterfowl.  Some areas have taken to capturing or shooting and turning them into human dinners or pet food.  On the other hand, they are kind of beautiful and some of the little bits of nature we get to see up close.  This particular group seems to think it owns the park, as it takes a stroll on the pond ice.
Sat-

Rainy slush turning to slick compressed ice under my boots and car tires.  Sirens going wild in the background, no doubt someone thinking they could stop faster than this surface would allow.  You can’t fight physics, and the physical properties of water at various temperatures are insanely amazing.
The little cabin-like house at the top of the “back hill” is not quite a remnant of much earlier days, but it does date to a time before the mansions that crowd rapidly month after month.  Everyone is either building new or expanding their quite comfortable dwelling to the size of a big-box store.  I’ve never quite figured out what they all see in it.  Having more natural yard is infinitely more interesting than more square yards of carpet and tacky doodads.  Well, the differences in people’s tastes are insanely amazing as well.

Ice and tide have mown the seagrass, which now fully engages in its annual rest.  Mats of grass and reeds either sink to the bottom to decay and nourish hidden chains of life, or litter the harbor shore.  Except for drift, not much is going to happen until the subtle solar signals of spring signal rebirth (whew!)
Weather stays extremely variable, as indicated by the distant fog where the cold water meets very warm freakishly humid air.  The only reason I can see at all is because the wind is whipping away the local soup, around the bend the fog is shaping into strange waves like some dry ice vaudeville spectacular.  We have been assured (but not by nature itself) that everything will now return to normal and average.