Here in the middle of the Northern Hemisphere, the cycle of the seasons expresses almost perfectly the contradictions of being human.  Each grand year brings a predictable pageant of nature, from brown emptiness, through bursting abundance, long growth, fruit and decay, and return to emptiness.  Always the same, yet always different, and each year we ourselves change and get older.
Our brains, tuned to detect patterns, strive to find meaning in the random chaos that accompanies each solar day, lunar month, or natural year.  But even though we gain control, much escapes us, and luck plays as much a role in the experience of our lives as it did that of our ancestors.  All we can really do is marvel that we have had a chance to participate, for at least part of another grand turn of the wheel. 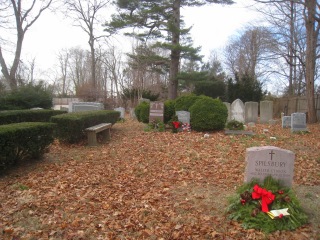 As another numbered year slips past, it is well to remember that our existence has limits.  In spite of evidence, we prefer to believe that we are part of some grand cycles:  that our soul, or our works, or our memory will last somehow forever.  No doubt each person “resting” here felt the same, though none of us know anything of them nor care to know.
Each day remains limitless in boredom or pleasure, and the days themselves are infinite in number.  Or so it seems.  These stones bear witness to the unfortunate fact that the end of another year also checks off another chunk of our allotment of measured time here on this planet.
Wed- 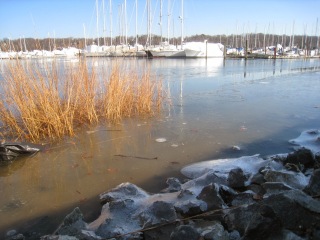 Fittingly, the new year starts with the first ice on the harbor.  Here near the former tidal dam, fresh water seeps from the pond through the earthen dike _ in spite of centuries of being packed down by vehicles great and small.  The fresh water, of course, floats in a layer on the salt, coats the rocks and freezes, and as the tide goes out,  forms interesting patterns of light and reflection.  In a few months, the grass will be sheered by the same general motions.

We are most familiar with the cycles of the year, and day, and (if we really try) moon.  Rarely do we think much about other repeating events like the tide _ an odd kind of thing, with a complex rhythm twice a day, and strong influences from random factors like the weather.  I guess we are too busy and have more important things to consider, but once in a while it is interesting to meditate on these simple oddities that make Earth what it is.
Thu-

Fresh snow cover with blizzard predicted later.  The white obscures and covers most remaining signs of life, punctuating the hibernation of this season.
I tend to romanticize our connection with nature, but of course I am a complete hypocrite.  I enjoy my warm house, well-made clothes, electricity, and hot cup of coffee in the morning.  I like to observe from the comfort of civilization.  Like Thoreau or Rousseau, I do not grow my own food nor make my own paper to write on.  Sometimes I can imagine living as an aborigine on a South Sea island, but never as one surviving a New England winter in general, nor a blizzard in particular.  We should experience our natural heritage, not endure it.
Fri-

The blizzard may have fizzled, but it is ten degrees with about six or eight inches of snow blowing around.  Cold enough for me to s
tay in.  Of course, this is normal weather in Montreal, and almost a heat wave in Quebec or Moscow.
Humans are natural animals, but the most incredibly adaptable on the planet.  We can live almost anywhere, but the most amazing fact is that wherever we live we grow used to and regard as normal.  I suppose if the species ever lives in space it will regard vacuum and airtight cubicles as the most comforting surroundings possible.
Sat-

An eleven degree sunset heading for a four degree morning.  I admit I took this from the comfort of my bedroom window _ stayed in except for an hour or so clearing the driveway.  I am at an age when I can fully appreciate being inside all day if necessary.
What keeps me in is less nature herself than human nature.  I do not trust drivers who are inevitably high strung and angry when inconvenienced by ice and snow.  They seem to regard anyone unburdened by the need to be doing anything useful as affronts to cosmic order.  So I avoid the roads until the snow melts a bit, and life returns more to normal.
Sun- 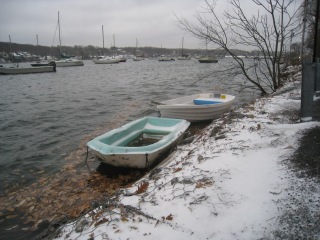 Pre storm, but capturing the mood of the winter so far, looks like we could be in for quite a memorable one.  Coldest temperatures in twenty years, more snow already than we have often had lately in months.  A White Christmas was just a formality, since the storms set in before Thanksgiving.
Silver lining department makes me wonder if the really deep freeze will halt some of the obnoxious invasive insects that have been marching into our fields and forests.  It would be nice if the flowers and trees and animals had a bit of a respite next summer.  On the other hand, I expect it will kill off a few of the less hardy birds as well.  Anyway, not much we can do except watch and wait.