Ancient astronomers tried to fit the cycles of the moon neatly into the yearly cycle of the Earth, but of course failed because the real universe often maddeningly fails to follow our logical, precise, mathematical models ( a problem science and philosophy still face head on, in spite of denials.)  Stable calendar systems had to come up with months or days thrown in periodically to keep the lunar calendar and annual calendar in alignment.  These inserted bits were often considered “between calendars”.
We would like to believe the seasons follow fairly strict rules around the equinoxes and solstices.  But weather patterns refuse to fall neatly in line, and this time in September can be confusing.  Hot or cold, wet or dry, windy or calm.  The vegetation follows the sun, but must take into account not only the current conditions but everything that occurred during the growing season and (like us) accidents of fate such as when the seed happened to land on wet fertile ground.
So we keep things like the barbecue and boat ready for the summer-like moments, and start to pack up the bathing suits and get out the sweaters for the chill that is inevitable, and remain in a happy suspense for a while, like the plants, taking whatever comes along. 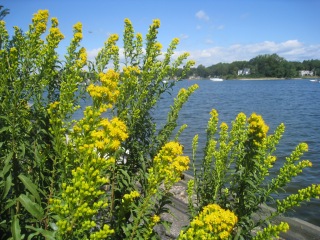 There should be a “goldenrod” day, presumably on autumnal equinox, when the yellow flowers of fall suddenly burst forth.  But of course, depending on how dry and warm it has been and how much sun each site receives _ not to mention various genetic variables in each plant _ the bloom occurs anywhere from early August to early October.  This year, it seems to be around mid-September.
There is almost no surer sign, in the midst of a late heat wave, that “this too shall pass” and that regardless of what our body is telling us about today, the cycles of the world are relentlessly moving on.
Wed- 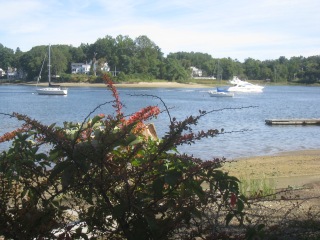 Colors are sneaking into the green all the time now.  Some are fruits, some are leaves but they all relieve the inevitable monotony that has gripped the landscape for the last few months.  It’s really one of the things those of us who live where there are seasons appreciate.  Too often, in these extreme times, we are directed to look at only a single spectacular moment _ peak foliage _ as if it occurred overnight.  But there is a wonderful and subtle harmony of changes that glow gradually into that crescendo, and it is a privilege to attend the entire symphony and appreciate nature’s entire work.
Thu-

One of the town docks at Coindre, pilings covered in barnacles, clump of spartina colonizing the shore.  All shellfish and plants in some ways cleanse the water, much cleaner now that runoff from the town is treated before running into the harbor.  We have no intensive agriculture around here, but the county has passed relatively strong regulations on lawn fertilizer use which are adhered to pretty well, at least by the contractors.  Still, a lot of dog and goose waste trickles in during rainstorms.
The exposed low-tide bottom was covered thickly in oysters a few centuries ago.  The blue barrels on the docks mark an attempt by some environmentalists to reintroduce them, not so much for an edible industry as to do more heavy duty filtration work.  So far, the results have not been particularly encouraging.
Fri- 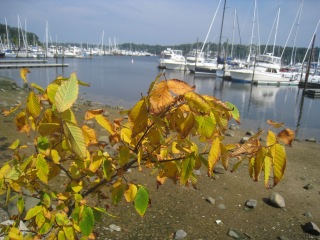 Early burst of color from a doomed tree sprouting from the concrete overlook at the head of the harbor.  Boat owners obviously remain optimistic that some good weather remains, although in fact for several years a lot of the vessels stay in the water year around.  Not quite this many, though, because the more prudent have them lifted and cleaned.
More and more of these spots of yellow, orange, and red as the days drift on.  Photographs by an amateur like me obviously do not do reality justice, but really all I am trying to do is get myself _ and maybe you _ to truly see them and their environment a little better than we normally do by habit.
Sat-

Some flowers like asters and this white silverlace vine bloom as fall approaches.  We tend to accept their aesthetic contributions gratefully without reflecting on how remarkable this really is, considering that everything else seems to shove flowering into the spring and midsummer.  Since we are always alert for metaphors and similes, we seniors who have not yet changed the world like to believe that we, also, are going to burst forth late in life.
Well, any stories that get you through the day and don’t harm anyone are fine.  In the meantime, it’s enough to just inhale the unexpected fragrance and notice how well they contrast with the brilliant atmospheric blues as the angle of the sun relentlessly drops further south.

Looks very much like summer _ except for the fruiting grass and the goldenrod.  Of course, if you were standing here (at the slight angle I seem to be, since I still can’t hold the camera level) you would feel that the breeze is very cool, and the traffic has picked up into autumn patterns, and the children are playing their organized soccer and football behind me and it is necessary to wear long pants today.
From the standpoint of what we see, pictures examined closely often tell us more than we actually experience visually at the time.  On the other hand, they are selected from a vast field of vision, and ignore all the massive other perceptions that flood into us each moment, and hence are total lies.  Often, the more art there is in a picture, the more it ignores the reality of being.  Nevertheless, such things are certainly pretty and amusing and useful in their own way.