Azaleas near our front porch have survived and thrived for more than half a century _ suddenly I feel pretty old.
Western tradition formulated binary division between soul and mind.  Man’s (sic) soul ruled by ineffable God, evil devils, unknown impulses, preordained instincts.  Mind carefully controlled with reason, based on facts and logic.  Soul and Mind in constant strife, the defining line between saint and sinner.  Freud invented a “more scientific” subconscious to replace the soul; others followed with differing constructions of how consciousness worked.  Today we are awash with popular explanations centering on body balance, instinct, genetics, gut feel, intuition, logic, fact and strange weird fantasies of all sorts. “Sober Intellectuals” claim we must follow fact and logic.   Political discourse proves we do not.  The devils are still in the details of mundane life. 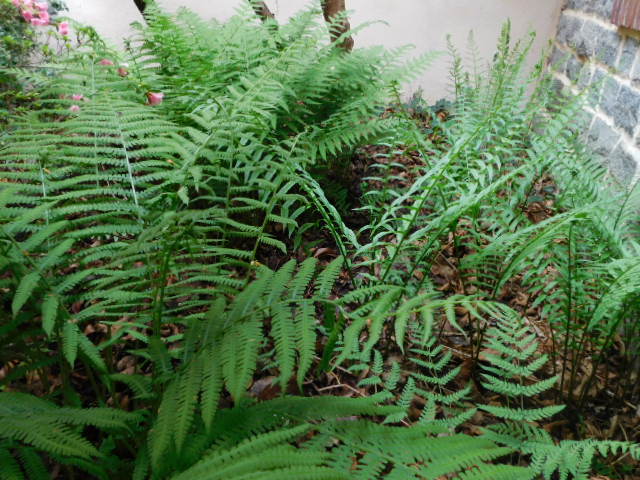 Ferns are usually among the last perennials to unfold from winter hibernation, but this year they compete vigorously with everything else.
Technology seems to promise fully rational lives and societies just around the corner.  Like religious millennia, “just around the corner” recedes constantly.  I find myself irrationally happy, angry, sad, depressed or elated and entertained _ sometimes all of them nearly simultaneously _ throughout the many moments of each day.  Trying to be rational rarely helps.  I am, of course, grateful for my mind with its logic and facts.  More of my daily existence seems concerned with emotions and visions and illogical streams of consciousness.  As for facts, whatever I may believe is quite frequently challenged by the opinions of others who think differently _ and by myself as time passes.

Massive fir trees rerobe in heavy new green each year, somehow surviving impossibly strong winds.
Our universe and umwelt are fractally complex.  Even “solid” facts arrive with exceptions and challenges, resulting from environment and situation.   As for humans and their society _ well, infinity is just plain infinity.  That we can agree about anything _ let alone most things _ is a true miracle.  That we can get along pretty well even without agreeing on many things is an even greater one.
Modes of thought can be overcome with determination.  Monks learn to ignore hunger as warriors ignore pain.  Instinctive behaviors can be reworked.  Intuition is constantly modified to allow us to get along together.  Reason becomes rationalization _ nor is that necessarily a mistake.

Lilac festivals are nearly as numerous as lilacs themselves.  The few blooms on our backyard specimen are all that are needed for heady perfume as we walk by.
A half century ago, when I thought as a child, reason appeared ascendant.  Conclusions logically based on scientific fact would automatically match intuition; truth was a zero-sum game with one winner.  As I aged, gut feelings often override cold logic.  Now I construct rationalizations to support intuitive decisions.  I treasure my intuition as an amalgamation of experience into quasi-instinct.  My “fight or flight” reaction when I see a tiger is well underway before I logically  enumerate “this is big animal.  With teeth.  Claws.  Run!”

Leaves are even more miraculous _ and sometimes more beautiful _ than blooms.  Because they are so numerous we sometimes take them much too much for granted.
Intuition is often correct.  Pretending that all we need is more education, more facts, more logic _ and then agreement will descend as manna from heaven is just another utopian fantasy.  I don’t claim to know an answer.   However, I will say that lately I am more likely to trust my “gut” than pure logic.  Rather, I view both as equally fallible.  Whether I make a snap
moral judgement or follow a thread of thought to a logical conclusion, I know I must recheck conclusions in the other mode.  Even when both sides of my reasoning agree, I mistrust myself.  Perhaps that paralyzes my actions at times.  Or, perhaps, that feeling itself is only a rationalization of aging .

Breathless displays of dogwood float everywhere to convince us how inadequate we are compared to the expansive beauty of this season.