Idle tugboat anchored  near the harbor channel is used to jockey various work barges into position.

Mowing outdoors seems a relatively pleasant chore as long as somebody else is doing it.

No paddleboard rentals when dark skies threaten and a stiff sixty-odd degree wind sweeps the waves.

Already end of summer tasks like cleaning boats for storage are in full swing.

This deli under various names has served a few generations of boaters and ball-players and, lately, cyclists. 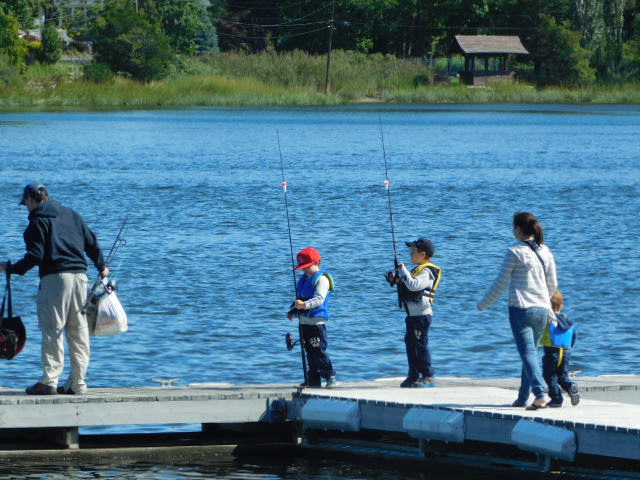 September is bobber fishing time for snappers grown large and impossibly hungry on incoming high tide.
As I wander through crowded Union Square in late August, I notice a group of demonstrators who are apparently just wrapping up.  The speaker has climbed down from his improvised soapbox and is putting away his loudspeaker.  As the crowd thins, I am intrigued by the signs they carry and hasten over to speak to one.
“Workers of the World, Relax!?  Don’t you mean ‘Unite’?” I ask.
“Who wants to unite?” responds the middle-aged brunette.  “Unite with whom?  No, we don’t want to unite with anybody, just to change the old boss for the new boss.”
“But …”
“What we want is for work to become more fun, less of a hassle and not so important to just staying alive.  Give everyone a secure place in the world, and then pay them on top of that for whatever needs to be done.”
“But …”
“Life is too precious to waste working.  Well, it always has been.  But now we have machines to do all the big stuff and it’s time for us to take it easy.”
“But …”
“The rich lately have just been freeloading.  I want to get up when they do, take time off like they do, and have the chance to focus on what I think is important like they do.
“But …”

“Relax,” she smiles.  “It’s going to happen anyway.  We just want to put some thought into it.”

We’ve got more than you