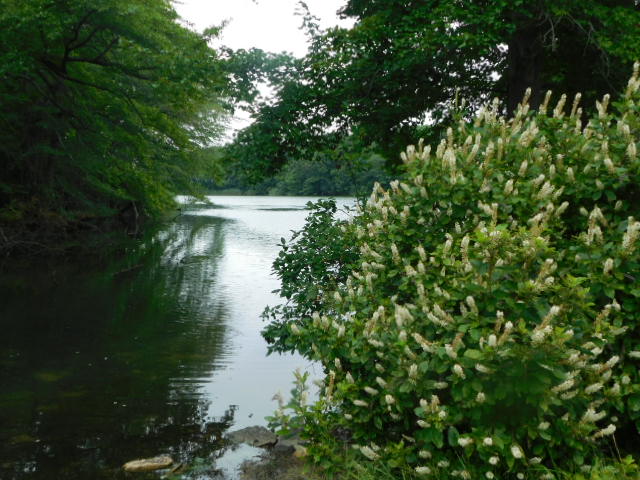 Spicebush at Caumsett smells infinitely better than it looks, and it looks pretty good.

Centerport children’s summer camp echoes with laughter beyond the tidal flats as life goes on. 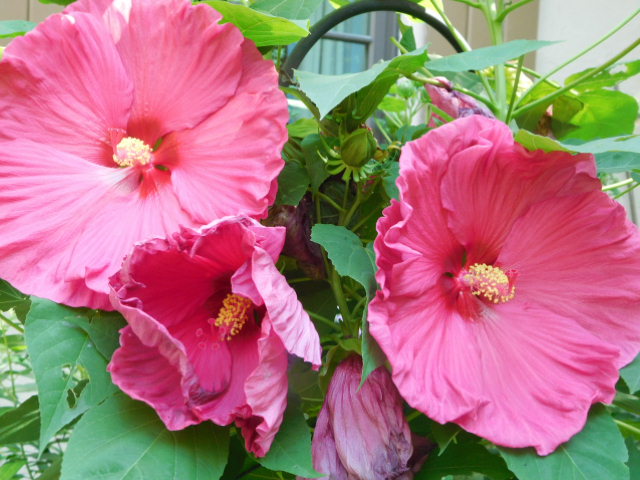 Perennial Hibiscus amazes us each year with such grand reward for so little garden effort.

Marigolds compete with kayaks on our misty public beach, a scene which will probably vanish within twenty years.
Shadow from a hulking twitchy young man falls on a woman lounging back in a beach chair.  Gulls fight for bread which small children throw at them.  “Hey Mom, doing nothing again, I see,” he laughs roughly.
“Ah, Justin, this is just so beautiful and perfect.  You should try it sometime …”
“Waste of time, beauty, What good is it?  What is beauty anyway?”
“Deep questions from you?  I guess college has broadened your mind more than I thought.  You guys get into heated discussions like this over beer at the bar?”
“Not hardly!” he exclaims.  “But we have one teacher … Anyway, I’m sure you can’t answer the question.”
She thinks a moment.  “Well, whatever it is, I think it requires variety and change.  And people.  You’ll never convince me a bird or dog experiences beauty.”
“Is that all?” he snarks.
“Enough.  Anything more just gets muddy.  But this, right now, is beautiful.  Now, Justin, you sit down right here and tell me everything that is happing with you.”
“Aw, Mom.”  In resignation, he flops on the towel next to her and begins his story.

The gulls flop off to panhandle further down the sand.

Fish clustering in thousands at head of harbor presumably trying to advance up streams that have been dammed.
August moon fills harvest songs
But now we harvest all year long
Summer sand and beach once rare
We visit year round through the air
I take for granted all my days
Hardly note late summer haze
My mind as emptied as the sky