Brilliantly emerald weeds add to the general exuberance of an exploding season.

Cherry blossoms overlooking harbor; not exactly Japan but Hokusai would appreciate the motif.

Tulips require a farmer’s foresight and optimism; planting bulbs months and seasons before any results.

Finally our Cinderella landscape is getting dressed for the ball.

Overhead canopy unfolds in a variety of pastel brilliances. 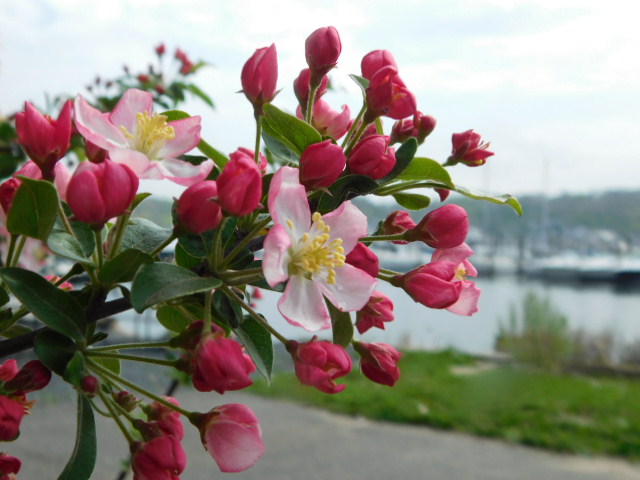 Lonely cherry tree blossoms profusely in the parking lot at a local harbor deli, mostly ignored by hungry passers-by.
“Larry, Larry, hey, what’s new?” Anthony glides slowly onto the sand next to his friend.
“Hey Tony, yourself.  Nothing much.  Holding the fort.”
“Where’s the gang?” asks the great grey gull loudly, as usual.
“Here and gone, mostly gone.  Bob and Tina said they were tired of the local food options, she couldn’t stand raw clams anymore, they flew down to the city a while ago.”
“Boy, they should have checked out the south shore.  You would not believe what you can get at some of the ocean beaches if you hit the right day ….”
“And Patsy, Heather, some of their friends _ young crowd you know _ into the city too.  More excitement, easier pickings, tired of the same old fare.”
“Who can explain this younger generation,” grunts Anthony.  “But what about Mark, Bob, Marsha?  Nothing but dynamite would make them move.”
“Gone, just gone, I’m afraid,” responds Larry.  “The winter was going so well, even for them at their age, but then that last unexpected ice storm just hit too hard.”
“Ah, ah.  Life goes on, I suppose,” Anthony sighs.  “Well, good to see you here at least.”  He glances at the long stretch of empty beach.  “Sure not like the old days.”

“Nothing is.  Nothing is.”  They squawk a while longer, then wing out over the whitecapped waves.