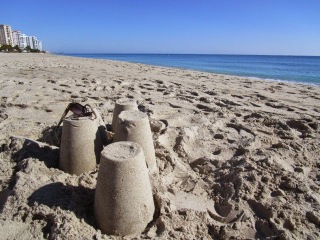 Almost anyone with access to the beach as a child has built at least one sandcastle, although nowadays serious adults usually produce “sand sculpture.”  Castles must be built relatively near the tide lines, because otherwise the sand is too dry.  That means that eventually, no matter how magnificent the structure, one wave or another from the rising sea will erase it completely.  That is one of their peculiar charms, a lesson in life framed as a playful pastime.
When older folks review their lives they begin to realize how much like sandcastles our certainties and ambitions have been.  The solidity of childhood, parents, early friends, young children, prideful career melt when encountering the irresistible waves of the future.  Our bodies themselves erode over time, waiting for the final inundation of mortality to level them back with all the countless other grains.  Yet that makes us appreciate all the more the eternal moments we have experienced as we concentrated on various turrets and walls and whatever else possessed our imaginations.   As the song says, “they can’t take that away from me.”
Tue-

Geology claims that just about anywhere on the planet was once along or under an ocean, so everywhere is a once and future beach.  The sandcastles people build are only of slightly longer duration than those of children, and are similar in being often decorated with frivolous details to their main purpose.  In this case it is the fountain, the palm trees, and the square in the upper left which is a clamshell half roof painted (crudely) to resemble the real sky.  Nobody needs any of that nor the landscaped parking lot in order to buy something.
Architects would claim that aesthetic touch adds value, and they are right.  But why that should be so in the cold calculating social and economic world that “social scientists” inhabit is a complete mystery.  At least to such frigid minds.  I believe it is one of our most wonderful attributes that we add beautiful but functionally useless embellishments to everything we do.  That separates us from the robots.
Wed-

Other creatures build structures, notably this coral which washes in constantly from a reef just offshore.  Some of it is destined, like the chunks here, to be ground into sand.  Some becomes embedded in sandstone, or with time and pressure turns into limestone or eventually is metamorphosed into marble.   It is difficult to imagine any shopping center or nuclear power plant being transformed into anything as beautiful as marble, but over geologic eons, who knows.

Lately, strong “scientific” theses are being advanced about non-human animal consciousness.  I do not think coral, or puppies, or dolphins can appreciate the beauties of those various forms of rock.  Our experiential awareness is several orders of magnitude _ possibly an infinite degree of separation _ from the thoughts of those minds.  I do not mean to lower the cosmic value of all forms of life, but rather to emphasize just how gloriously unique and privileged we each are.
Thu-

Lauderdale by the Sea, town center, evokes the temporary spirit of sand castles appropriately.  Unlike its monolithic neighbors marching down the shore, each looking like it could withstand an apocalypse or two, this area looks like it could be blown off by sea surge or hurricane.  Somehow, that seems right for building on a sand spit.
Besides, that is also the spirit of the tourists passing through.  None of them are making plans for the ages _ most of them are probably trying to forget the problems and failures of plans for the ages.  The locals are not into eternal memories either _ they just want to dip into the stream of money flowing by as they sell trinkets and serve food and drink.  It’s fun to let the inner child play once again.
Fri-

Break from sand and decay and gloomy thoughts _ it’s vacation after all.  Even if here in South Florida the temperatures plunging into the high thirties with fierce winds have driven those who cannot find down parkas to thoughts of suicide.  Nevertheless, the sun manages to put on a fine show each morning.

One of the greates
t gifts we have, I think, is this chance to always wake to a new day.  I have never been one to hate sleep, although I sometimes wished I needed a little less of it.  But. like the sun, we get to restart and shine for a while, regardless of the past and before the moments weigh too heavily.
Sat- 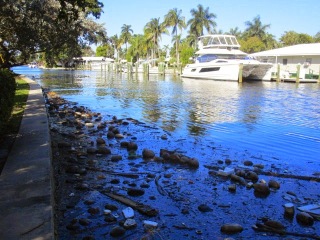 Like many other places, Fort Lauderdale styles itself the “Venice of….”   Canals alone do not make a beautiful city, although all of them collect the flotsam of heavy winds and lax tides.  Here, amidst the coconuts and garbage, a dead pelican.
We all last longer than a typical sandcastle, although perhaps not so long as a few of the things we create.  But only we experience each day as if it is endless, each moment as if it goes on forever, each experience as if it is simply a window into deeper and grander mysteries seen and unseen.  Time for us is as fluid as water in these canals, and the occasional dead bird is a warning we easily ignore.
Sun- 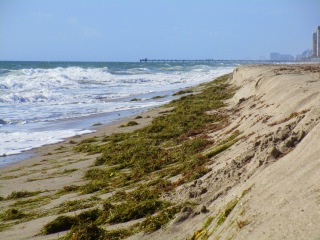 Since anthropomorphic tales are such fun, we can picture the sea as carving its own castles _ the beaches themselves,  the barrier islands, even this tiny cliff resulting from high winds.  Every day it resculpts the shoreline into a slightly new pattern.  Well, not entirely true.  One grain may seem identical to another, but of course each is truly unique at the subatomic level, and each composing atom has its own complex history over eons of time, and grains are shifting constantly with wave and current and wind.
The ocean tends to evoke mighty metaphors and grand moralistic stories.  Hypnotic and powerful, we imagine it as implacable and relentless.  But all those adjectives are tinged by being applied to humans as well, and human connotations change everything.  For now, I empty my mind and enjoy the play of water and sand and where we all have been and may go.