All the foliage is now turned and in various stages of drying brown, the only uncertainty being which raindrop or snowfall or gust of wind will eventually drop each leaf onto lawn or into gutter.  Biological function is fulfilled, except for ultimate decay to nourish future life.  In a more morose mood, I would make an analogy to being a senior in human society.
Flocks of certain kinds of geese, not those that  hang around all year, have been overwintering in this harbor for several years now.  Some would claim that as a sign of global warming, but I don’t need such subtle indicators.  In Thoreau’s time ponds all around here were used to harvest ice blocks when they froze solid, even when Joan and I grew up there were frozen lakes and streams on which to skate.  Now _ not at all.  You can argue as to whether humans cause it, or if the effects will be for better or worse, but not that the climate is different than it has been recently.
Tue-

Most of the horizon now a harmony of thinning yellows and browns.  Artists will try to capture such things, but of course images are not reality.  You would think such limited pallet would be boring, but nature is never boring.  If a natural scene bores me, I know exactly who to blame.

In a frantic world, it is often necessary to consciously slow down _ even to stop dead _ to regain such a perspective.  I rush too frequently with eyes blinded to a vision of the future, staring into desired futures rather than experiencing my surroundings.  I accept the need for speed to simply live in this culture, but I must be willing to fight against it consciously as much as possible for my own deeper cosmic sanity.
Wed-

The boats are gone from puppy cove, the buoys are being picked up and stored off at the end of the harbor, half the leaves are fallen from the trees along the shore.  The day is beautiful and warm, apparently the last of this until spring arrives.  Nobody wants to be inside, loveliness is overwhelming.

We all get to pretend we are good little ants now, having worked all summer to store up for our winter needs while the frivolous grasshoppers fiddled away.  Of course most of us did no such thing.  We worked at keeping our income available, in the civilized faith that somewhere someone else was growing our food and digging our energy.  It’s amazing what lies we can tell ourselves about how virtuous and independent we are, when in fact we generally have never been so individually helpless.  Carpe Diem, my friends, while we have it.
Thu- 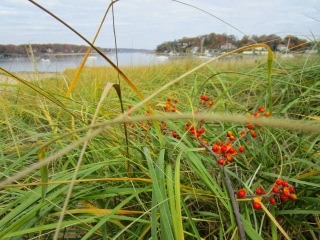 Signs of the season, but another example of beauty everywhere.  The trick of being an artist _ or at least of experiencing life as an artist _ is to be able to experience uniquely and intensely.  Most of the time, I go through life blin
ded by what I think is important and what I must do next and what will be necessary.  I fail to feel my heart beat, I ignore the distracting sounds, I filter out anything that is not danger nor opportunity.  If I can just stop, and look, and meditate for a moment I will be rewarded with incredible riches _ but I simply do not think I have the time, if in fact I think at all.
There was an old saying common in the counterculture _ “the further you go, the less you know.”  It is an old person’s lament, a joke among the young, and yet it is true.  At least for a certain value of true.  As I go less far, I seem to understand far more.  Maybe it is a trick of a deteriorating brain, but I find it helps me feel fulfilled every day.
Fri-

Calm waters, emptying rapidly.  I guess most of the boat owners expect another hard winter like the last one, with the harbor possibly freezing over deeply, crushing hulls.  Looks like the expensive craft have mostly been removed, anyone who took their chances last year either paid dearly or were frightened to death.  So we regain a slightly bucolic vision.

Calm is pretty unusual for mid-November.  There is almost always something blowing from the north _ from a constant relatively gentle breeze to a relentless gale.  The only time that stops is when wind from the east overcomes the prevailing normal.  A still day is welcome _ both for visual effect and for relief when walking through the chilled air.
Sat- 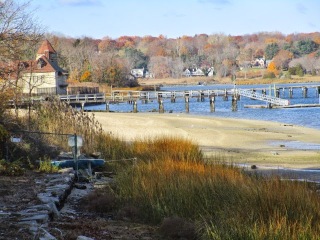 Day to day changes now can be dramatic.  The tree in full colorful foliage one afternoon may be nothing but branches by the next.  Whole sections of land transfigure.  Microclimates and the vagaries of wind patterns mean that for a while nothing is really in step with each other _ there are pockets that look like midwinter, others that hold promises of late summer.  But the trend is clear.
At first I welcome the bite, a refreshing difference from the flabbiness of by now ordinary mild temperatures.  Then I wish it would go away.  Finally, I adjust completely and what was once ridiculously cold becomes the new normal _ or even the relatively warm.  I find the fact that I still have the flexibility to go through such transformations myself, season after season, to be a hopeful reminder that I am not yet entirely fossilized.
Sun-

Today I present the cathedral of the Japanese Maple.  It is true that this was taken yesterday; today is overcast.  Nature presents its cathedrals all the time, with sacraments and services every moment, if we have the will to observe them.
Faith is just another word for unknowable.  Some scientists with faith that everything is just random coincidence affected by underlying mathematical laws could doubtless write Proustian multi-volume texts showing how everything just happened to lead to my enjoying this moment and writing about it for you.  My faith that it was especially directed at me to guide appreciation and contemplation of the universe is no less valid, and no more provable.