Early autumn morning mist softens the far shore, as the bright seaweed glistens exposed by the receding tide.  Once in a while, it is good to simply empty the mind and rejoice in the beauty of our world.
Tue- 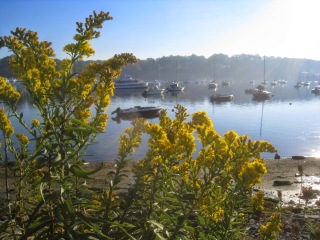 As the sun rises later and later, my habitual strolls continue to occur at about the same human clock time each morning.  So the landscape is subtly changed with the angle of the sun, if I simply pay attention to the scene.  In another three months, walking at this time of day would be practically dawn were it not for the _ once more human convention _ of changing the clocks on daylight saving time.
You would expect people in tune with nature to set their activities in time with their circadian rhythms, but of course that is silly.  Since we used fire _ which may have preceded homo sapiens _ we have determined our own sunset, using campfires to artificially prolong the day when we consider it too short.  The blunt truth is that the foundations of our species lie in pushing back against the easiest “natural” path to do what we want, and when we want.
Wed- 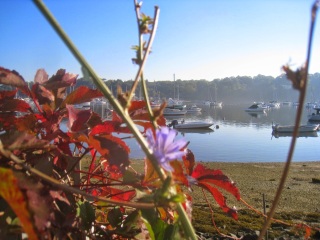 Now come the “spectacular colors” as all the travel advisories from countless little towns you have never heard of flood the media.  Time the trip and arrive at peak color!  Spend some days (and some money) and enjoy the spectacle all around!  Whole forests and mountains draped in red, yellow, and orange!

I always wonder if it is not just as rewarding to study a few leaves, like these, each spectacular in its own right, or a single brilliantly red maple on a clear pond, such as we have at several places.  After all, one leaf, well observed, is often quite as remarkable as a tree containing ten thousand.  And a tree containing ten thousand brilliant fluttering leaves is surely just as wonderful as trying to take in ten thousand trees in the hazy distance.  At least these days, I like to remain close to home and try to truly notice all the subtle and startling changes as these weeks progress.
Thu- 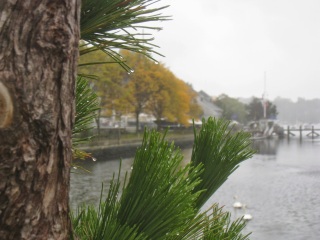 Heavy misting rain off and on heralds the changes to come, softening the glows of yellow and green and blurring the far horizon.  You at least do not have to stand here getting wet and cold while taking the picture, but that experience is important too.  From here on its an extended set of spurts to biting wind and bare branches.
Long Island needs the rain _ TV meteorologists report we are in a “rain deficit” for the month.  Averages are human things _ nature could care less _ and we try to attach them to reality with misguided certainty.  Rain in October is part of the cycle of fall, regardless of the calendar.  But it sometimes does feel that if global warming is doing anything at all noticeable in the short term, it would seem to be adding to extremes _ harder storms, longer dry spells.  All I can do is appreciate each day uniquely as it arrives.
Fri-

Something has to lead the parade, and it seems certain trees _ whether from species or location or individual genetic difference _ are always the first to change color.  After a while, you seek them out as avidly as any flower in spring.  There is something nearly more
dramatic about brilliant orange or red against a solid green background, than the same effect lost among a myriad of other flaming displays.

One of my faults is to frequently forget that trees are individuals, as different from each other as any animals.  But from nursery school, I’ve mentally plopped them into the landscape as brown sticks with a round green blob on top.  Being aware of tree differences is a good exercise in appreciating the infinite variety of every little corner of our world.
Sat- 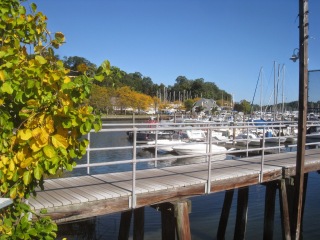 The golden locust trees in the distance are at “peak” and will be stripped in the next rain.  Autumn gets down to business from here on, one wave after another.  The vine in the foreground shows the dramatic effects of slight differences in wind direction and exposure, but soon enough minor differences will be engulfed by the ongoing larger weather trends.
Like the spring, early October around here is a time to inspect and enjoy quickly or not at all.  Trees can become brilliant and then gone in what seems a flash _ green one day, glorious orange the next, all brown and falling soon after.  With eyes wide open you can go by a familiar place day after day and _ if you are really looking closely _ find it hardly recognizable.  There’s a metaphor there for those who are old, like me, but I’d prefer not to explore that further and instead concentrate on the beauty of eternal events.
Sun-

First real chill is blowing across the harbor (although in three months this would be felt as an incredibly balmy, almost tropical day.)  Goldenrod is losing its bloom and concentrating all its remaining strength on rapidly producing seeds for the coming years.  For an organism to grow and thrive and just before it withers and dies produce the next generation is completely alien to humans, who procreate (and think about procreation-related activities) incessantly until they are old, when _ well, not so much.
Why an individual person hangs around after genetic species necessities are fulfilled is the subject of some debate among biologists.  I think it is simply that humans found a way (biologically) to introduce continuity of culture, which strengthens the tribe and its chances of survival.  In societies without writing, it is the elders who are the repository of folk knowledge, taboo, mysteries, learning, and religion.  It is elders who can lend a more dispassionate voice in councils of activity and war, and although they may not be always be wise nor relevant, their advice can provide welcome perspective and counterpoint to the frantic immediacy of youthful decision making.  Of course, an elder would naturally claim that ….