Mussels piled up under the dock presumably indicate the water is healthier than it once was.  With all the talk of sea level rise, it continues to amaze how far out spring tides can go.  These little deceptive indicators are probably why everyone has so much trouble accepting ongoing challenges of climate change _ we only see results in catastrophic events.  Otherwise, everything just seems as normal as ever.
I won’t see this all go away, probably.  But I may see the tides much higher all the time, and the sand beach submerged.  On the other hand, the tendency here has been for currents to fill in and perhaps the beach itself will be pushed up with the water.  I am simply a curious observer now, not a participant nor anyone who believes that by turning off the lights more frequently I can prevent what is going to happen.
Tue-

Simple pleasure scenes of summer return now.  Empty rowboats, reflections of grass above the waves.  The water in every one of its moods remains fascinating, even if that is only true because I am not lazy enough to spend long moments staring hypnotically.  Sitting and doing nothing is somewhat harder when it’s cold and raining.

After all, that is one of the true functions of beaches everywhere.  We can just sit and do nothing and let our minds drift as sun and sea lull us into meditation.  Those with no beaches available can look up and do much the same with clouds.  It’s a wonderful universe, and at times like these we feel fully part of it.
Wed- 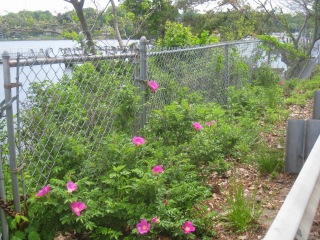 Beach roses opening before most of the hybrids.  From here on, there is a profusion of color as first the trees and shrubs join the blooming extravaganza, followed by an increasing wave of flashy annuals until a little after solstice.  Then it is the long sustained crescendo of whatever specialty flowers people buy and plant, but by that point they are just small pinpoints in a world of green.
An alien intelligence like a computer would assume that once we have seen this cycle we would never really find anything interesting in it again.  Certainly still enjoying the pattern after having watched it for nearly seventy years would seem to be an indication of brain dysfunction.   Yet, powered by the subtle unconscious desires of biology and nature, we always respond, and it is miraculous and wonderful that we do so.
Thu-

Deadly nightshade blooming already, one of the prettier weeds.  Not only the odd flowers, but also the bright red fruits later.  Of course, it is in the tomato family.  The fact that it manages to survive in the same habitat as ragweed always amazes me.
The rest of the harbor environs this day are fairly damp and miserable.  Not quite raining, but so humid water can form drips in front of your face.  Not exactly cold, but with a strong breeze even the mid-fifties can require a heavy jacket.  The sun is tryi
ng it’s best, but cloud cover is grey and gloomy.  Once we’ve had a taste of eighty degree temperature at this time of year _ as we did a few days ago _ we are ruined for the season whenever the weather goes back to being “average.”
Fri-

Colorful kayaks are ready to go, the dock has been repaired, boats sit awaiting passengers.  True, it’s only fifty-odd degrees this morning, but the intent is there as soon as summer arrives and compels appropriate activities.
Along the shores of Long Island, we have started to develop our own picturesque aesthetic, as beautiful as anything in New England or Europe.  You can almost immediately tell where you are, as you can from pictures of, say, the Cote D’Azur.  There are certain elements that remain the same.  This will only last for an instant, a brief flash before sea levels take it away, but it is lovely today and worth appreciating.
Sat-

Just more of the same old harbor, same old boats, same old water, same old sky, same old ….  Just because it is not the most different or most unusual or most spectacular does not mean it should be ignored.  Most of what we encounter is beautiful, and every moment is unique.  You are never this exact age, in this exact position, ever again.
Appreciation of existence is exactly understanding moments.  The past can be part of them, because we are composed of memories.  And our consciousness reaches out a cloud of comprehension and planning and being that goes far beyond our immediate environment.  But what is here should always be part of our awareness.  Anyway, that is my thought on more of the same old stuff today.
Sun-

Starting this month, I am expanding horizons a bit.  The last year has been restricted, for the most part, to places I have actually walked from my house.  Age is becoming more restrictive, and so this will now include almost anywhere I go doing the day _ the town, parks, the city, the beach.  Long Island has many such that I visit fairly frequently.
This old 1711 homestead is in Caumsett state park.  I like to go here because it is far less crowded than the rest of the park, and connects me back to days when the land was wild and new.  On the other side of the dwelling, barely visible, is the inlet which connected to the rest of the known world at the time.  Three hundred years ago_ an infinite distance from where we live now.