In spite of temperatures in the teens at night, at least part of the time, the first crocuses are arriving.  They probably won’t get to shine in singular glory for long _ likely by the end of this week we will have some higher temperatures and other flowers popping.  Can’t be too soon for most of us.

For the end of March, and in spite of the inviting blues and pleasant contrast of browns, this is pretty depressing.  April is supposedly the cruelest month, and in terms of our expectations it often is.
It’s not that we expect greens and yellows and reds everywhere, but we a counting on some fairly visible hints that they are on their way.  This year, everything has been damped behind our normal schedule.  Combined with the outdoor biting gales, it has been almost (but only almost!) as bad as February.
Wed-

Thirty degrees, fifty miles an hour near the end of the harbor here, and it looks and feels like the North Atlantic in bad times.  Even the seagulls are having such a bad time they are mostly grounded.

The only good psychic thing about a day like this is that if you really dress warmly and get out and walk anyway, listening to the rushing trees and the crashing waves and all the other sounds of nature drowning out the usual hums and whines of civilizations, you can feel virtuous.  Actually, I feel quite happily wrapped in my little shell, in spite of the dust and gravel occasionally whipping into my face.
Thu –

As a comment on this year’s harshness, it’s hard to beat this clump of wild garlic.  I’ve seen more verdant _ and much more abundant _ clumps in mid January.   This one seems struggling against doom itself.  Making it worse, this was about the only patch I found.
When you get down to looking hard for weeds to prove spring is on its way, you know you are getting pretty desperate for some hopeful signs.  Often by April I am scornfully pulling such things out of my flower beds.  It’s all relative.
Fri- 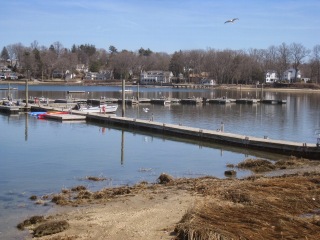 Just about a final look at the relatively clear view across Knutson’s marina before the boats start coming out of storage.  The sky and sea have radically changed since the gales and hard cold of earlier, and the seagull seems to appreciate it as much as I do.  Still look in vain for any hopeful buds or leaf clusters on vine and branch.
Any water is infinitely beautiful and mysterious to me with reflections, permutations, distortions and the endless interplay of wave and wind. Besides which, right now, is when the water is the most pure top to bottom and the most unsullied on the surface with no debris or slicks of various kinds.  I simply need to adjust my internal expectations to be able to grasp other aspects of perceptual magnificence.
Sat-

There we are _ a few small shoots somehow making it through the blasts in the wind shadow of a trunk down near the beach.  All we really need is a week of “average” weather without any “record setting lows for the date” and things will be exploding.  Even today, the birds are going crazy, flying and chattering everywhere.
I’m a little tired of small signs _ I want some big dramatic stuff now.  Lawns turning green and becoming ragged, hillsides covered with small flowers, crowns of trees glowing in fresh crimson and green which cannot be easily ignored, or too easily imagined.  Fortunately, these few leaves indicate I may be in luck.

Perhaps a fitting end to a month that has been memorable for all the wrong reasons.  A combination fog/drizzle hangs over the cold surface, steeping everything in water, bright and dark at the same time, exactly what you might to expect to encounter in the vestibule of Hell.  Even birdsong is subdued.
Humans have been forced into necessary rhythms against their better judgment.  It’s Sunday in spring, so many people are jogging and walking and trying to assure themselves that this is a good thing.  It’s the first week in April, come a day, which calendar-drives many out to boat clubs and docks to tidy up and inspect their craft for the coming season.  I’ve done most of the hard days through the winter, I plan to just sit this one out.