Probably just a hostage here today, leaving tomorrow unless the predicted “light dusting” turns magically into another “historic northeaster” on Tuesday.  In any case, this time we will take our chances camping out at the airport even if there are problems.  Good place to be  a hostage, of course.
These fuzzy blobs are white pelicans, crowded in the Darling National Wildlife Preserve _ another in the chain that includes Target Rock _ which the guides were assuring people usually were not available in such numbers.  They and the other birds were quite beautiful, and by far the most wildlife we have seen in any park down here so far.  I have a new appreciation for how jammed with waterfowl Huntington really is.  Anyway, the people around us, most loaded with high end telescopic super cameras, no doubt could provide you with a detailed set of portraits.  I’m not sure I get quite so enthused over the difference between the brown pelican and the white.  It may be the “second largest native bird in North America” but it still seem significantly smaller, and less dramatic, than the swans gliding majestically in familiar waters.
Tue-

Sunset looking backward, which seems appropriate.  Being active outdoors at the beginning and end of the day is the main reason to head to a warm climate when the weather at home is bad.  We live completely normal lives in winter now, thanks to technology, but usually huddled in artificial warm caves.  It has been relaxing to again greet the sun and bid it goodbye.

The deserted appearance of the sand is a bit deceptive.  Sanibel at this time of year is stuffed to the gills with people, utterly overloading the infrastructure.  Traffic jams on the only road begin at dawn and don’t let up until near midnight.  You cannot walk anywhere in meditation without being on the alert for some wobbling newbie bicyclist to knock you down, or a jogger on paths that are too narrow, or streets that _ even when dead end _ are always filled with cars going somewhere and groups of people striding briskly.  The standard price of success, I suppose.
Wed-

Minor delays, but home by midnight.  Islip didn’t look all that bad, but as we got closer and closer to Huntington the snow deepened until the roads resembled an old Russian fable.  We half expected wolves to be jumping out from behind snowbanks.
Today it still looks pretty bleak, but we still have fresh perspective so it remains picturesque.  Anything can be picturesque for a few days, I guess.  Glad to be back, but also happy at having missed the enervating sameness of cold and wet and grey for day after day.
Thu-

First things first.  Couldn’t walk anywhere until I got the cars dug out.  Well, it’s another chance to be in the great outdoors, relatively muted.  Two days of warmth and rain while I dug have actually cut the original drifts to half their original size _ at first it was hard to find the cars at all.
I suppose, under all this, the bulbs are still pushing up.  Don’t see many tree buds swelling, but I’m sure they are getting ready as well.  The days continue to lengthen and the sun progressively strengthen, even though it is hard for mere people to notice.  If I wanted to be Pollyanna, I would say that we will appreciate spring all the more when it finally does start to show _ but my back refuses to go along at the moment.

Through the cold, the snow, the endless gloom, an andromeda gets ready to bloom anyway.  The first real warm sunny day will probably start to open some of the small flowers.  In a few weeks, it will be fully open with white bunches that last for the duration of colder spring.
I am lucky to have electricity and distractions _ an andromeda is all very well to contemplate, but one needs to be more of a monk than I am to practice it all day.  I enjoy books and music and even the chance to go to the supermarket.  I’ve never claimed to be a back to nature survivalist, just someone who appreciates the natural world which should be preserved better than we seem to be doing.
Sat- 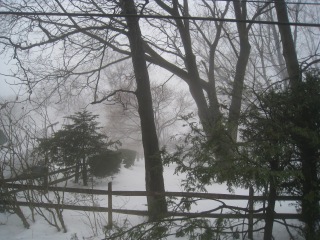 The other night I expected wolves, this afternoon it looks more like Hollywood vampire effects.  The rest of the world is warmer than normal _ in France fruit trees are blooming a month early.  I don’t see any sign of that here _ in this fog I don’t see any sign of anything much at all.
The weather is obviously changing.  Some claim that is true, but it is not our fault, just coincidence with sunspots or cosmic rays or supernatural will.  It seems to me that is like drunks complaining about a headache the next day and blaming it on a tumor, bad water, or stress rather than having anything to do with how much they were imbibing the night before.  And not willing to modify behavior for a while to find out. 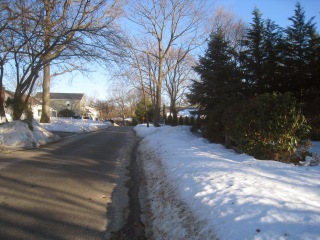 Since water has been around for us and our ancestors forever, we tend to take the drama it provides for granted.  A snowstorm can, in a few hours or a day, completely change the landscape and the infrastructure by which we live.  Heavy rain can cause all kinds of incredible damage.  Ice has its own tragedies.  Drought, although taking longer, may be the worst of all, especially when accompanied by fire.
More than that, water is rapidly fickle.  A clear sky changes into something else.  A heavy snowfall may shut road to one lane.  Yet, especially at this time of year, the sun and a warm front can in a day reduce a four foot snow pile to two feet, a two foot cover to nothing at all.  All the snow here was at least twice as high a few days ago.  Of course, our industrialization can build snow mountains in parking lots that rival anything in the Sierra Nevada, and which may not go away until mid-spring.