A couple of weeks, a few big gales, some frosty mornings, all have harmonized to harmonize the vegetation and the sky.  The season is now obvious at a glance, the cycle of rest and endurance has arrived.  Time to pull out the winter clothes for those of us unable to simply hibernate and wait.
That, of course, is only true for anyone who still pays attention to nature.  An awful lot of people, it seems, find that the roads are still passable, the stores are still open, work continues, and the outdoors continues as barely noticed background.  After all, it is almost Thanksgiving!  Christmas around the corner.  New Year’s, Super Bowl, winter vacations line up in one long rush. Spring will arrive on a carefully orchestrated flight path which guides everyone through dark and cold with minimum inconvenience.
Tue- 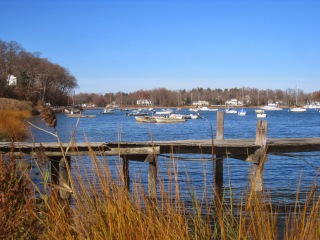 Even without brilliant greens and whatever other colors flash in the foliage, a harbor is a visually arresting place.  Ports along the New England coast have always shown that.  The weathered old docks and the brilliant blues of reflected skies are purely elemental, in some ways enhanced by the lack of competition.

Now, of course, we get ready for the ice, which arrives later and later each year, if in fact it arrives at all.  At some point, there will certainly be snow, but here the bad weather in November and December is usually gales, cold, and rain.
Wed-

The brutality of the season can make us instinctively recoil.  The vegetation looks like its been murdered, and the looming clouds promise more of the same.  It’s still relatively warm, but I instinctively clutch my collar tighter and hurry on.

Civilization is never more prized than now.  I can visit this scene and then move on, happily back in a home that is brightly lit, warm, and with whatever food might strike my fancy.  Those that wish to go back to primitive pre-industrial bliss are welcome to it _ the reason civilization exists with all its hassles is that most people are grateful to have options.
Thu-

Four hundred years ago, Thanksgiving day, this continent was all but virgin natural, unaffected by industry and the massive works of mankind.  The waters were clear and swarming with wildlife, as was the land.  A few tribes lived here more or less peacefully as far as we can tell, people just like us.  No houses, more vegetation along the beaches, no docks, they were probably glad to see the insects leave, although maybe they grew used to the harsh winters and nasty mosquitoes.
I am a child of my times, and never wish to go back.  I like modern civilization, although I sorrow at the stupid and unnecessary de
struction we are wreaking on our ecological heritage.  I am grateful for all I have enjoyed during my lifetime, while concerned about how much our descendants will curse our name. This day, in particular, seems a moment poised between two worlds _ the Eden that once was, and whatever horrible wasteland the planet is being rapidly turned into.
Thu- 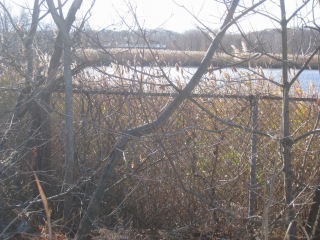 It would be nice to think the freshwater mill pond was filled with migrating waterfowl, but the birds on the water are just the local seagulls and geese who have acclimated to year round residency (although sometimes this time of year their instincts get the best of them and they fly a v formation up the harbor and back.)  It’s actually already too late for most of the migrations.  The small bufflehead ducks arrived from the north a few weeks ago, but they prefer the salty waves.
Nothing heroic in this picture.  Just, as advertised, bare branches and brown leftover seeds.  Even the leaves have already sunk to the bottom, beginning another cycle into organic detritus.  You look at a picture like this and it is always hard to believe that in just a few months it will all be softening yellow and red and green once more.  Most people up here, truthfully or not, will tell you they like the contrasts.
Sat-

The tide goes in and out twice a day regardless of the weather, although the moon and a big storm may exaggerate its effect.  Unlike the leaves, the colorful kayaks never fall off their perches, and lend a festive note to the acid clear blue and sharply etched branches in this Canadian air.
Beauty, like happiness, is all in our heads, and not always foremost in our consciousness.  There are many other cares and worries and chores that must be done.  But if we need them, beauty and happiness are always there, somewhere, even if somewhat insignificant by Hollywood standards.
Sun-

Coindre Hall does look a little like a mad doctor’s laboratory, starkly rising amidst deadish trees on the crest of the hill.  You almost expect bloodcurdling screams and the crash of monster feet through the underbrush.  We could probably add to the drama with howling winds and tattered clouds racing across a full moon _ ah, but that’s just a story.
Humans like to slip stories into whatever they encounter.  It helps us remember, and put things in perspective and just have fun where otherwise there might be none.  Some would say the age of great storytelling is gone, that mass media has dulled our creativity into oatmeal but just walking around for a while can bring it all back quickly.  Surprisingly, our stories often make us appreciate what is really there more than we would if we were just looking with a blank mind.