Hard to make out the snapping turtle on this magnification, but its nibbling on leaves below the 15 foot high dam at Hecksher.  About two feet head to tail, I guess.  I’ve seen at least one above the dam all summer, but hard to believe this would be the same one.  A few years ago, there was another a few miles away on the harbor beach.
So I guess it could be a breeding colony, or it could be a few here and there dumped in by lazy hobbyists.  Certainly it’s possible that this one-time native species is following the deer, foxes, river otters, and osprey and recolonizing.  Anyway, the first of a few curiosities.
Tue- 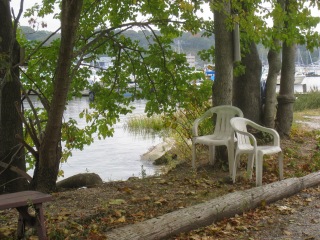 How, you ask, is this bucolic scene in any way a curiosity?  Because it is almost the last of such formerly numerous places tucked anywhere around the harbor.  Somehow, this small slice of private property _ deeds dating back to the Revolution _ has escaped being leveled for a road or a marina, or turned into a private beach, or otherwise destroyed.  It is just about as it was fifty or so years ago, perhaps with different chairs.

Sadly, I know it will also go soon.  Neighbors complain about the fishing smell, the town covets it for a park, the owners rub their hands in anticipation of a sale.  It’s not that what follows will necessarily be bad, just that I miss an occasional undeveloped patch here or there.
Wed-

Some future marine archaeologist might snorkel upon this and think it a primitive alter on which sacrifices were offered to the gods. Alas, it is only an alter to upper middle class pretensions, burning wealth to the god of appearances.  Nevertheless, it is a cute little thing, around for many years now, from the prehistory of our own little neighborhoods.
Part of the fun of life is to sometimes take note of the little odd things rather than the most magnificent, whether for example fungi in the woods or the ornaments that folks put on their lawns.  Anything can be astonishing and lead to interesting mediations on life, meaning, and happiness.  But only if I work at it.
Thu-

The green structure is the Ezra Prime Octogon House, built back in the mid 1800’s. Apparently there was a craze for eight sided structures, which fairly quickly subsided after people found out have difficult it is to maintain a structure without right angles.  This one manages to hang on along Prime Avenue on one side of Hecksher Park.

We may not have the deep history of Europe or Asia, but there are a few centuries of history all around for anyone interested in it.  Fortunately,  we seem to be realizing it and preserving some of our heritage not so much to know who we once were, but as a relevant and living extension of who we are today.
Fri- 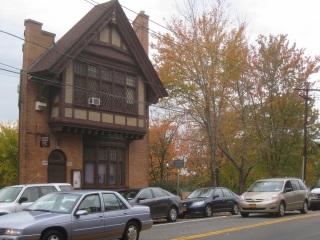 This is Huntington’s own version of a crooked house.  Built as a public training school, it has its handsome front squared up along Main street, but the walks wander back at an odd angle possible aligned with true North (I haven’t bothered to check.)  So from an angle like this, the side seems to disappear, leaving just a kind of old west façade surprisingly made of brick.
There obviously used to be a certain joy in architecture _ octogons, crooked walls, all kinds of turrets and gingerbread and towers _ that was all but erased in the boom from the fifties through a few years ago.  Hopefully, some of that playfulness will now return _ but for right now the homes are all boring boxy McMansions and the public centers are all monotonous heavy concrete and brick.

The Valencia Tavern is one of the few remaining landmarks of a distant time when many of the town’s inhabitants went out for lobsters, fish, and clams for a living.  Which is to stay it dates from before the 1950’s suburban sprawl  and population boom that transformed everything.  Nobody knows how long it can hang around _ some forlorn baymen still end (or sometimes start) their day here, but there are no crowds and the regulars are sparse.
The fiberglass bull statue is an affectation of the owner put up sometime in the last three decades.  It is cute, and out of place, and has an affectionate place in many hearts, but it is fighting a losing economic battle.  Only some miracle fad of young people suddenly deciding for some reason it is a interesting place to be could save it now.  Like most of the old town, it will soon be gone, torn down or repurposed.  Nobody yet thinks of landmarking a bar.
Sun-

An obscure and neglected little park tucked in among the ramshackle Knutson’s boat works, built on what was formerly (and well before my time) a pottery factory which used local clay deposits since the time of the Revolution.  Once upon a time there might have been grand plans for it _ as this picnic pavilion now completely unused indicates.  Even this shed on the waterfront _ and concrete along the waterfront it faces _ is ready to go one winter or another.
No doubt, as at the end of the harbor, these picturesque old friends will soon be leveled for something shinier and more in keeping with what the town lawyers think is appropriate for avoiding lawsuits.  Most lawyers seem to pass Anti-Aesthetics 101 easily, so my guess is that the inevitable results will be pretty awful.